2.2. The difficulty of establishing a classification

2.2. The difficulty of establishing a classification

It is very evident that not all types of waste are equal, making classification necessary.  ‪A first attempt at classification was made taking into account the activity that originated them. ‪Thus, waste was divided into three main groups that corresponded to two of the traditional sectors (agriculture and industry), while the third group was waste generated in towns and cities. ‪That is, it talked of agricultural waste, industrial waste and urban waste. ‪In this classification there was also a fourth group which grouped wastes because of their characteristics (medical, radioactive, etc..) and could not be added in any of the three previous types thus becoming part of the category "other waste".

Although this classification could be appropriate didactically or pedagogically (as may be a classification that takes into account the physical/chemical characteristics of waste), it was soon found to have significant deficiencies for the purpose of waste management and a new classification was needed that took into account the specific characteristics of each, for example, behaviour in relation to environmental agents and its potential evolution over time or the impact on the environment and people's health. ‪Thus, according to the toxicity and hazards, waste can be classified as inert, special and non-special.

Inert waste is considered that which, once deposited in a landfill, does not undergo any significant physical, chemical or biological transformation, and also meets the leaching criteria determined by regulations. ‪Included within this group of waste are rubble and other construction debris. ‪This type of waste contains recoverable fractions that have to be retrieved and others that have to be object of controlled disposal.

Special waste is considered to be any solid, liquid or gaseous material destined for the landfill, which contains any substance or matter specifically described in the scope of Directive 91/689/EEC of 12 December relative to hazardous waste, in quantities or concentrations that pose a risk to human health, natural resources or the environment.

Non-special waste is considered to be all waste that is not classified as inert or special waste.

As a result of this need to classify waste there appeared the European Waste Catalogue (EWC), which became effective on January 1, 2002. ‪In the EWC wastes are grouped into 20 categories or groups (Table 1). 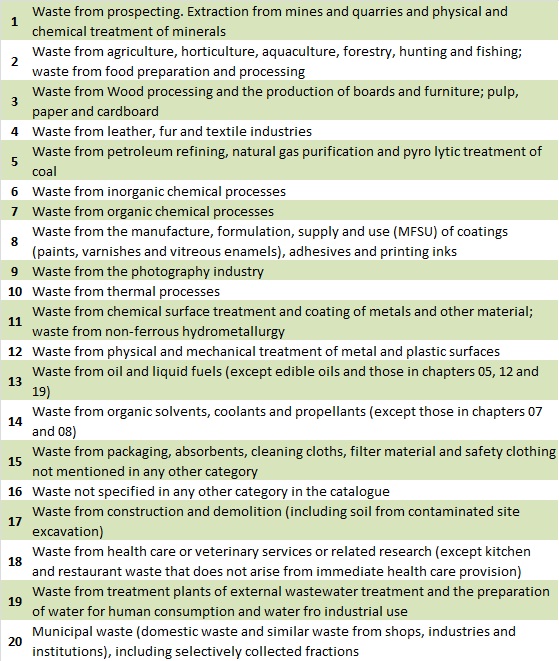 At the same time, each of these 20 groups is divided into subgroups, which include waste according to affinities. ‪For example, within category 20 (municipal waste) there are three subgroups that are shown in Table 2. ‪And in each of these subgroups there is a description of the wastes that conform to it, its classification, the most likely route of valuation (recycling, reuse, etc.) and the treatment and disposal of rejection (landfill, incineration, etc.) when necessary.

‪Thus, for example, within "selectively collected fractions" (2001) there is, among others, glass (200102). ‪Glass is a non-special waste, the route of valuation, which is made by recycling and has no treatment or disposal of rejection, since all glass can be recycled. ‪The coding and classification of all wastes, the different routes of recovery, treatment and rejection disposal are available in the Waste Agency of Catalonia.

Table 2. ‪Types of municipal waste according to the EWC