3.1. We generate much waste

3.1. We generate much waste

It is very evident that not all types of waste are equal, which makes classification necessary. In 2000 the total amount of municipal waste (household and equivalent) generated in Catalonia reached almost 3.5 million tonnes. ‪A total that in 2009 reached 4.2 million. ‪The result is an increase, in relative terms, of 20.8%. ‪However, as can be seen in Figure 1, for the second consecutive year this amount has been reduced over the previous year. ‪In the year 2009 less waste was generated than in 2008 and the amount of 2008 was lower than in 2007 when it peaked with a total of 4.3 million tonnes of waste. ‪It seems logical that an initial explanation is that the constant increase of the waste generated is the same as the  increase that has also occurred in the number of inhabitants. ‪And if, the population variable accounts for much of the increase in total municipal waste generation, then during the period 2000-2009 it has increased 18.7%. ‪Obviously it does not fully explain this and there are other variables to consider.

‪Meanwhile, Figure 2 shows the evolution of total municipal waste generation between 2000 and 2009 in the 5 most populated countries in the European Union: Germany, UK, France, Italy and Spain. ‪As in the case of Catalonia, in the other five countries the amount generated in 2009 is lower than in 2008 and none of them has had a decrease in the population. ‪With the exception of Germany, in the other countries the amount generated in 2008 is also lower than in 2007. ‪The main difference between these countries is that while in Spain, Italy and France waste generation has increased in the whole of the last 10 years (like in the case of Catalonia) in the UK it has remained stable and in Germany it has decreased, despite the increase in population. ‪Also, we should note the differences in the maximum peak waste generation.

In the United States of America, as in the case of Catalonia, the ceiling in the generation of waste is found in 2007. ‪That year a total of 255 million tonnes were generated while in 2000 there were 242.5 million, down slightly from 243 million in 2009.

Why in recent years, despite a population increase, has there been a reduction in the total amount of municipal waste generated?

‪Everyone produces municipal waste, but the significant difference is in the amount of waste generated by capita. ‪According to available data from the United Nations Statistics Division, in 2009 the country with highest per capita generation was Antigua and Barbuda with 1639 kg / inhabitant / year. ‪Also, countries like Singapore and Monaco exceeded the figure of 1000 kg per year. ‪At the other extreme are Madagascar and the Philippines, 127 and 141 kg / inhabitant / year respectively. ‪It is obvious that countries with higher per capita generation stand out as having a major tourist activity, thus there is a large contingent of people who visit these countries and generate waste. ‪A population that is not counted when calculating the per capita generation of waste. ‪On the other hand, we must take into account that in the case of countries with very low generation, the percentage of population with systematic collection of waste is very low (17.7% in Madagascar).

Figure 3 shows the evolution in the generation of municipal waste generated between 2000 and 2009 in the United States of America (USA), the European Union (EU-27), Spain, Denmark and Greece. ‪One can observe a significant difference between the U.S. (value above 700 kg / inhabitant / year) and the EU-27, the figure has stabilized at just over 500 kg / inhabitant / year. ‪However, within the European Union as a whole there exists important differences, as can be seen in the following figure, and especially in Table 3.

Source: Compiled from Eurostat and US Environmental Protection Agency

‪As shown in Table 3, the country with higher per capita generation in 2009 is Denmark with a total of 833 kg / year, increasing more than 25% in the last 10 years. ‪Also, Cyprus, Ireland, Luxembourg and the United States of America have higher values ​​than 700 kg / inhabitant / year. ‪The main difference between them is that while in the United States of America there has been a decline in the last 10 years, in the rest, increases of different magnitude have been documented. ‪At the bottom of the list there is Poland and the Czech Republic with only 316 kg / inhabitant / year. We highlight that 9 of the 10 countries with lower rates of waste generation per capita are countries in Eastern Europe.

‪Table 3. Municipal waste generated per capita (kg / capita / year) in the countries of the European Union, the USA and Catalonia 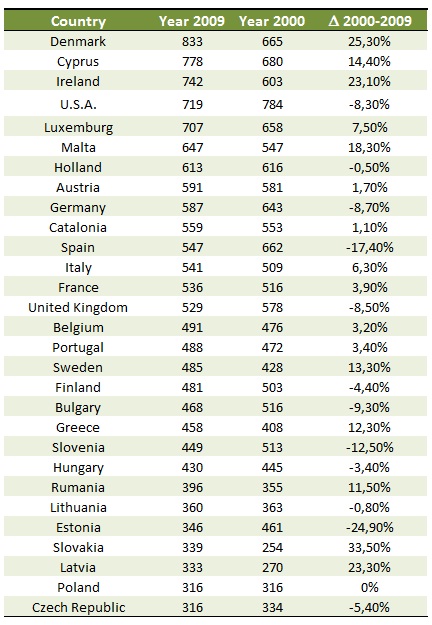 Source: Compiled from Eurostat and US Environmental Protection Agency and the Catalan Waste Agency

Figure 4 shows the territorial differences in Spain at the autonomous community level. ‪It is fair to say that in this case the years with available data are 2002 and 2008. 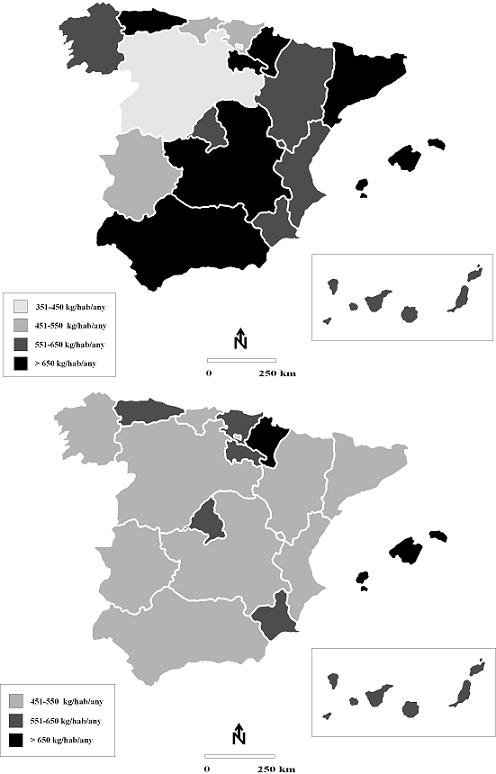 Source: Compiled from the National Institute of Statistics

If these results are compared with those of 2009 (bottom of image in Figure 5) we can ascertain that both the number of counties with generation per capita lower than 450 kg / year and the number of counties with generation greater than 650 kg / year has decreased. ‪The first are still confined to the western sector of the territory, except for the region of Gironès, meanwhile the second still remain eminently tourist counties. ‪However, all of these have improved results. ‪Thus in Baix Penedès generation per capita has reduced to 793 kg / year and in Baix Empordà to 819 kg  / year. ‪Also, we must highlight the significant worsening in the counties of Conca de Barbera, Priorat and Ribera d'Ebre, which have gone from generating less than 450 kg / inhabitant / year in 2000 to over 550 kg in 2009. 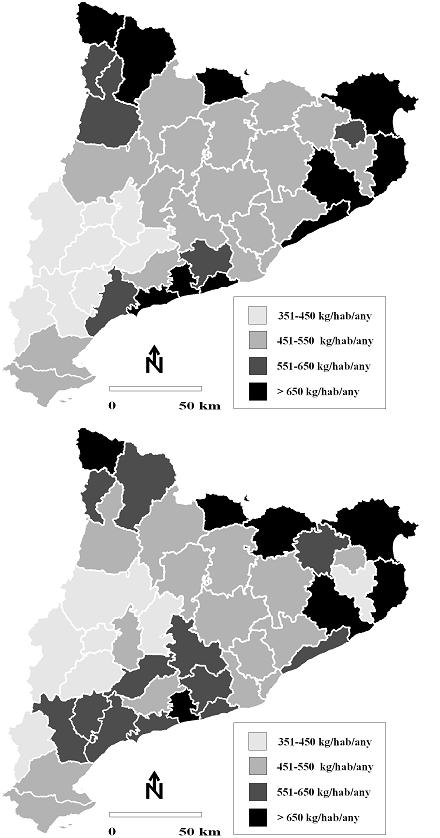 Do the inhabitants of the region of Penedès Baix really generate more waste than the Terra Alta area? ‪Possibly yes, largely because of economic variables. ‪But, is the difference really so great? ‪Absolutely not. ‪The just over 100 thousand inhabitants of the county of Baix Penedès were computed as having generated a total amount of waste that was actually generated by a much larger population. ‪This is the population not officially registered in the different municipalities of this county but actually live there, as well as, the people that visit or live in it temporarily (tourists and hikers). ‪All waste generated by them is not computed to them.

Figure 6. ‪Waste generation and weight of the primary sector (above) and the services and construction sectors (below) to county GDP (2009) 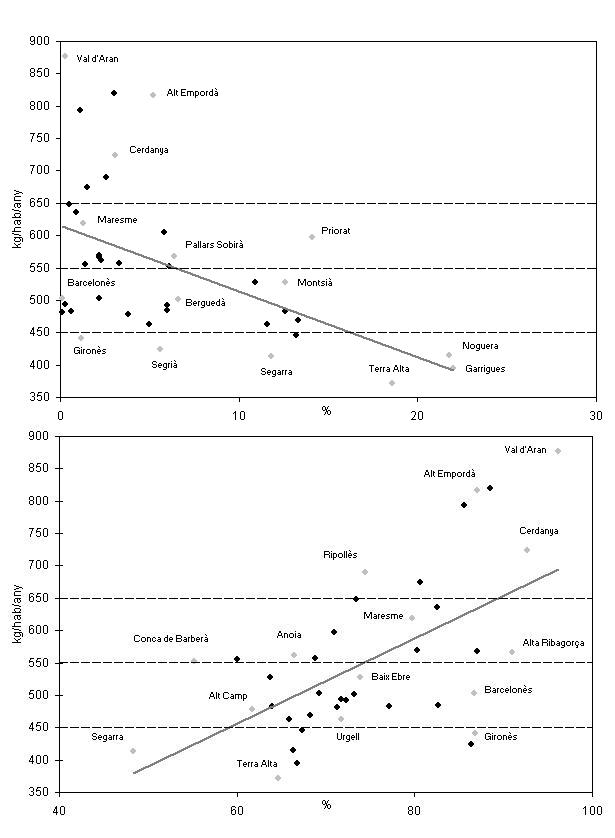 Figure 6 shows the relationship between the generation of municipal waste per capita in 2009 with the agricultural sector's contribution (above) and the sum of the contributions of the service sector and construction sector (low) to GDP in the different counties of Catalonia. ‪We note that for reasons of space  the names of all the counties are not included. ‪In the first case you can see a clear inverse correlation, that is to say, that the greater the weight of agriculture in the GDP of the county, the less the amount of waste generated per capita. ‪And the opposite occurs in the case of  services-construction sectors, with an obvious direct correlation. ‪A greater contribution of these two sectors to local economy generates more waste per capita. ‪Commercial activity plays an important role in the generation of waste (plastic, glass, cardboard, etc..).