Due to its characteristics, waste can generate an important environmental problem from the moment the producer generates it. ‪If we talk about municipal waste, the producer has to dispose of what is commonly called trash due to space considerations, and in the case of the organic fraction, of odours and the possible emergence of insects and other living organisms. ‪This type of generated waste temporarily accumulates along public streets in urban areas, either in single family bins, as is still done in some small towns, or in community containers distributed in different parts of the city. ‪In both cases poor management in the collection of waste can cause, in addition to a negative visual impact, the appearance of bad odours  (organic matter decomposition) and the appearance and proliferation of both insects and rodents, which is an obvious health risk for the population. ‪A similar thing can be said about the process of transporting waste to its final destination.

‪Before different administrations carried out policies to sensitize the population about separating the different wastes that are part of trash and to carry out a selective collection, all or most of the waste generated (especially in cities) was introduced into the same container, where they mixed glass, paper, cardboard, plastic, organic waste, etc. ‪Waste from these containers was periodically collected and transported to landfills which, in most cases, were located on peripheral land near cities and in which environmental considerations, when choosing them as a site of waste disposal, were not taken into account. ‪The waste was dumped in these areas where, in some cases, it was burned in the open.

‪Impacts of this type of management (storage phase and / or elimination) on the environment are considered to be very important. ‪First of all, there is visual impact, generated by mountains of waste accumulated in many cases relatively close to populated centres with the possibility of dispersion of the waste (by wind or rain) to the fields or forests in the immediate surroundings. ‪Then there are bad odours caused by this decaying waste, odours that can reach distances faraway from the landfill taking into account the prevailing winds. ‪In these landfills there is a permanent presence of both insects and rodents, which makes them a source of infectious diseases. ‪The periodic burning of waste in the open when the landfill is full causes, firstly, the generation of smoke and air pollution, but to this we must add the risk of forest fires, which can be caused either by carelessness of the burning or the possible combustion  due to fermentation of accumulated debris. ‪Moreover, the very nature of the waste and the fact that it is directly placed on the ground may cause contamination of the soil, in addition, due to the permeability of some soils, some waste products called leachates can eventually contaminate both groundwater, if the site is located above an aquifer, or surface water, in the case it exists in proximity.

Figure 7.  ‪Municipal waste landfill in the year 1995 (top) and the same site in the year 2010 after the closing (below) 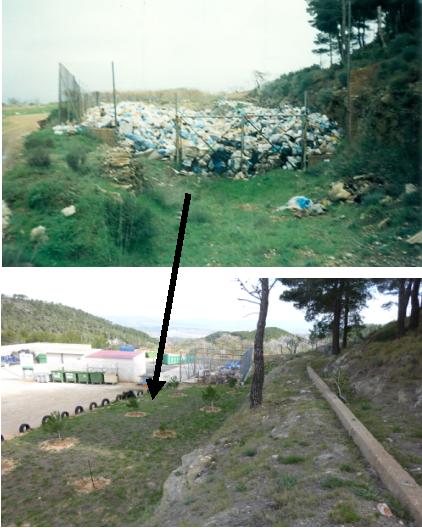 These types of waste disposal areas, or simply landfills, were closed in Catalonia and in Spain as a whole, since the second half of the nineties of the twentieth century. However, this is the only type of trash management that is still performed today in many countries of the Third World. ‪Figure 7 shows the location of the municipal landfill of the Catalan town of Rasquera (Ribera d'Ebre) in 1995 and the same site in 2010 years after closure.

Catalonia, as well as, Spain, as part of the European Community, in order to solve this problem and in parallel with the closure of illegal or uncontrolled landfills, opted to design and construct controlled waste landfills, namely landfills where accumulation of waste is done in such a way as to avoid or at least mitigate the impact on the environment. ‪Now, as much as the management of waste in these landfills supposes a lower environmental affect, they do have a limited capacity. ‪Given this reality another option was adopted, which was the incineration of waste in plants designed for this task. ‪This solved the problem of space occupied by waste, but it generated others.

The design and operation of both controlled waste landfills and waste incineration plants, as well as the advantages and disadvantages of each will be discussed in section 3.6.