If we constantly generate more waste, controlled landfills have a limited capacity, incineration also causes major impacts and no one wants landfills or incinerators near their home, WHAT SHOULD WE DO? ‪At this point is when the concept of waste recovery comes into play, in other words, any procedure that allows the use of the resources contained in waste, provided that these procedures have no adverse effect on human health and the environment . ‪The goal is to recover, from the total  waste generated, the largest percentage possible in order not to send it to landfills or incinerators. ‪This recovery may be by means of reuse or recycling, that is to say, use a product for the same purpose for which it was designed originally or transform it within the context of a production process for its original purpose or for other purposes. ‪The composting process, which is discussed later on, is also included within recycling. ‪However, this attempt to minimize the non-recoverable fraction of the waste must run in parallel with the search for new ways to reduce the total amount generated.

‪In contrast to the "single container" where all municipal waste arrived without separation (Figure 8)-regardless of whether it was glass, organic or paper- now there is selective collection, namely, the distinct and separate collection of organic fermentable materials and recyclable material or that which permits separation of the recoverable materials contained in waste.

Figure 8. ‪Family bin in front of a house (left) and container in the street (right) 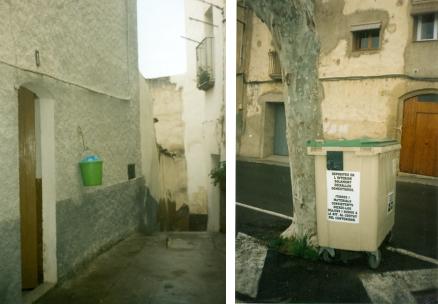 However, for this collection to succeed, first of all people have to be conscious of environmental issues, related to waste, so that it can be selected at the source, namely from each house. ‪Secondly, in addition to awareness, the fact that we can dispose of each of the different types of materials that are part of municipal waste in the corresponding containers must be facilitated. ‪The density of these containers has to be high enough so that the distance between the place of residence where waste is generated and the container does not pose a problem. ‪And thirdly population must perceive that the effort made selecting at the source has positive results, from both environmental and economical points of view..

‪The result of all this is the emergence of new urban furniture consisting of the traditional garbage container, together with others, each with a different colour, which identify each of the types of waste generated in homes. ‪Recently, in some places these surface containers have been replaced by underground tanks that are less noticeable and minimize odours (Figure 9). ‪The last step, which seems more effective, is called door to door collection.

‪Selective collection is mostly made up of glass, paper, light packaging and organic matter, which are the main materials that comprise the so-called municipal waste. ‪In a second group there are batteries and medicines, which are part of the identified as special municipal waste.

Glass containers (clean and without caps) must be deposited in the green container. ‪Those which are returnable, after a proper cleaning process, can be reused for the same purpose. ‪Furthermore, glass is 100% recyclable. ‪From 1 kg of old glass we obtain 1 kg of recycled glass, which saves on raw materials. ‪At the same time this type of recycling decreases both air pollution, as well as, water pollution during the manufacturing process with non-recycled material. ‪There is also less energy consumption and it also reduces the percentage of waste that would go to a landfill or an incinerator.

b) Paper and cardboard

The blue container is where paper and cardboard is to be deposited, separated individually and folded in order to occupy less space. ‪The benefits of recycling paper and cardboard are very important: there is a decrease in the consumption of water during the papermaking process if it is done with recycled paper, there is a decreased need in using raw material from trees and there is less water pollution, as well as, atmospheric pollution during the manufacturing process. ‪As in the case of glass, paper and cardboard recycling means less energy consumption and a decrease in the volume of waste to be disposed of or incinerated.

‪We have to differentiate between recycled paper, which is obtained primarily (> 90%) from old paper or residual paper, from ecological paper which is made without using chlorine in the bleaching process of pulp and which can also be obtained from recycled paper. 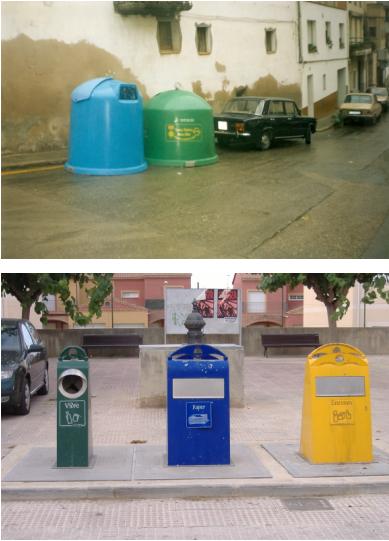 Within the category of light packaging there is plastic (white polyethylene, coloured, PET and PVC), metal and aluminium cans and TETRA-BRIKs. ‪The corresponding container is yellow. ‪Steel and aluminium cans are 100% recyclable. ‪Meanwhile, plastic packaging can be recycled for the manufacture of plastic bags or to obtain new non-food containers. ‪The recycling of these materials yields a significant savings of water and energy, and as in the previous cases, a reduction in the amount of waste going to final disposal.

The fourth component of municipal waste is organic matter, which represents between 40 and 50% of total municipal waste generated by a person in the more economically developed countries, which is why it is important to be selective, namely to separate recoverable from the fraction of non-recoverable waste. ‪This group includes food scraps and other waste from the kitchen, as well as, garden waste. ‪Organic matter should be disposed of in the corresponding container in biodegradable bags. ‪Through a process of composting, organic matter is transformed into a material called compost and can serve as fertilizer for agriculture or gardening. To ensure the quality of the organic matter it is necessary that it is not mixed with other waste.

Due to its characteristics and the presence of mercury among its components, batteries must be collected separately and must be treated in a specific way. ‪Containers for the collection of batteries are not usually found on the street, but are located in certain establishments.

We must consider surplus or expired medications which are generated in private homes, along with their appropriate packaging, as special municipal waste. ‪As in the case of batteries, these medications must be brought to pharmacies, where they are collected and transferred to facilities equipped for their classification and subsequent treatment. ‪This group does not include x-rays, needles or prostheses, among others.

‪In addition to the different containers distributed through the streets of town centres and in some commercial spaces, there are also the so called green points, where in addition to municipal waste mentioned above (except organic matter and medicines) we can also take, under the supervision of a manager, other materials such as tires, batteries, scrap metal, paint, used vegetable and mineral oils, textiles, appliances, furniture and other bulky municipal waste.

WHAT PERCENTAGE OF TOTAL MUNICIPAL WASTE GENERATED IS ELIGIBLE as MATERIALS FOR SEPARATION AND RECOVERY, WHETHER THEY CAN BE RECOVERED OR RECYCLED?

This figure could be higher than 80%, which would significantly reduce the problem posed by the great generation of waste, since less than 20% of this waste would be deposited in landfills or incinerated.

DOES 80% OF OUR WASTE END UP IN SELECTIVE COLLECTION?