In the year 2009 in the European Union (EU-27) 41.8% of municipal waste was selectively collected, while 38.1% of the total went to controlled landfills and the remaining 20.1% was incinerated  (Figure 10-above). ‪Despite being far from the potential 80% , this data is much better than the 2000 figure, when the amount of trash collected selectively was 26.7%. ‪Figures from the United States (Figure 10-bottom) are slightly worse than those of the European Union, where only 33.8% of waste generated  was collected selectively, 11.9% was incinerated and the vast majority (54.3%) was sent to controlled landfills.

Figure 10. ‪Distribution of municipal waste according to its management in 2009 in the European Union and in the United States of America

Source: Compiled from Eurostat and US Environmental Protection Agency

In the case of the European Union, the outcome is the result of very different realities of the 27 countries that form it (Table 4). ‪Thus, from the data of 2009, over 90% of municipal waste generated in Malta, Romania and Bulgaria ended up in a controlled landfill, while in Germany, Austria, Belgium, Denmark, Holland and Sweden this type of waste disposal was below 10%. ‪In the case of incineration the classification was led by Sweden and Denmark. ‪In both countries almost 50% of municipal waste is incinerated. ‪More than a third of the total waste are incinerated also in Germany, Belgium, France, Holland, Luxembourg and Norway. ‪Austria leads the ranking of countries with selective collection of 69.9% of the total waste generated. ‪Also, three countries: Germany, Belgium and Holland exceed 60%. ‪At the bottom of the list, in terms of selective collection and recycling (<10% of total), are the Czech Republic, Latvia, Lithuania, Malta, Romania, Slovakia and Bulgaria.

Table 4. Distribution of municipal waste according to its management in the year 2009 in EU-27 and the U.S. 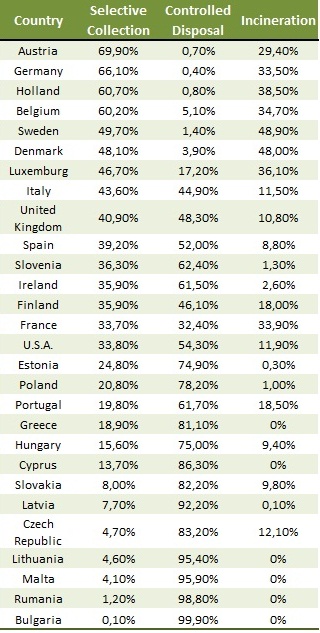 Source:ompiled from Eurostat and US Environmental Protection Agency

In Spain, the percentage of municipal waste collected selectively in 2009 represented 39.2%, while 52% of the total were disposed of in landfills and the remaining 8.9% were incinerated (Figure 11). ‪This same Figure 11 also shows the distribution of municipal waste, according to their management (recycling, disposal in controlled landfills and incineration), in the most populated countries of the European Union (Germany, UK, France and Italy) in order to make it easy to compare the differences between these countries. ‪Germany stands out for its high level of recycling and its minimal waste management through its underground placement (0.4%). ‪In contrast, in Spain more than half of the waste itself is confined to controlled landfills. ‪In this group of 5 countries, France is the one with a highest percentage of incinerated waste (33.9%), slightly higher than in Germany. ‪But France is also the country with a lower level of selective collection (33.7%). ‪Italy is the country where the amount of waste recycled and incinerated is more similar (43.6% and 44.8% respectively). 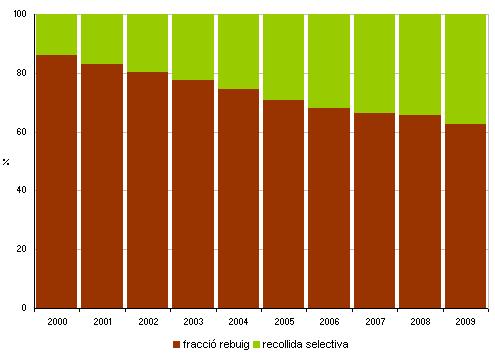 ‪And in Catalonia? ‪Figure 13 shows the distribution of municipal waste between the years 2000 and 2009, differentiating between selective collection and residual fraction (final disposal in landfills, incineration or other treatment). ‪In the year 2000 the percentage of selectively collected waste was only 14%, but since then this percentage has increased every year until 2009 to 37.5%, this latter figure slightly lower than that of the whole of Spain.

In 10 years the number of selectively collected waste has doubled. ‪It is not surprising that this spectacular increase in relative numbers, since in Catalonia selective collection of municipal waste has a fairly recent past, especially concerning the collection of the organic fraction. ‪This improvement has been made possible by the work carried out by the different administrations with the objective of boosting selective collection of waste (availability of specific containers for each type of fraction, green points, etc..), together with the  increased awareness by the public. ‪However, collection figures of 2009 in Catalonia and Spain are far from that of Germany and still further from the 80%, figure given above as the potentially achievable.

As with the generation per capita, in Catalonia the percentage of municipal waste selectively collected varies significantly between counties, as shown in Figure 14.

Figure 14. ‪Selective collection in relation to the total waste generated in the different Catalan counties in 2009 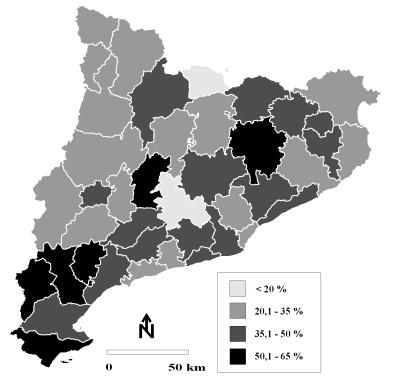 In 2009 a total of 6 Catalan counties selectively collected more than 50% of generated municipal waste (Montsià, Osona, Priorat, Segarra, Terra Alta and Ribera d'Ebre). ‪The highest value being that of the latter county with 56.9%. ‪A total of 16 regions have values ​​ranging from 35.1% to 50%, while 17 others are within the range of 20-35%. ‪Only 2 counties of Catalonia with selective collection figures below 20% in 2009 were: Cerdanya (19.1%) and Anoia (19.9%). ‪Given this important local variation of 2009, it has to be noted that in 2000 only 2 counties (Alt Urgell and Garraf) selectively collected more than 20% of generated municipal waste .

As already mentioned, the differences between counties will be determined by both public awareness, as well as, by the policies carried out by the different administrations. ‪In this sense, there is no question of the role selective collection of the organic waste fraction will play, assuming it is implemented, at the time of obtaining a higher percentage of total waste that is not destined to controlled landfills or to incineration. ‪The Catalan Waste Agency estimates that the organic fraction represents, approximately, one third of the total weight of municipal waste, although as indicated by López et. al. (2010), this value can vary significantly given the different social, cultural and economic characteristics of the territories.