As explained above, uncontrolled landfills (and illegal dumping) were and are a potential source of alteration and degradation of different systems that make up the natural environment (atmosphere, land, water and biosphere), and can also be a focus of disease and infection that can have repercussions on human health. ‪In order to eliminate or at least mitigate these impacts, it was first decided to bury the waste but taking the necessary measures as to have the minimal impact on the environment. ‪Later it was also decided to make waste disappear (or a good part of it) by incineration.

HOW DO WE AVOID THE POTENTIAL IMPACTS GENERATED ON THE ENVIRONMENT WHEN DISPOSING WASTE IN CONTROLLED LANDFILL?

‪Assuming that both the design and the different treatment processes of waste within the facility must be appropriate and must work perfectly, the choice of location is key. ‪And to make this choice we must have an important knowledge of the territory, especially those aspects of the physical environment: geology, hydrology, climatology and biology.

Thus, according to Royal Decree 1481/2001 of 27 December, which regulates the disposal of waste by depositing it in landfills, the considerations that must be taken into account when locating a waste landfill are:

However, the legislation also makes clear that a landfill can be authorized if the corrective measures taken indicate that there will not be a serious risk to the environment.

‪A first condition when choosing a location should be to avoid the visual impact of these facilities by placing them far enough away from populated areas but with adequate accessibility, due to the traffic they generate; not being near towns also reduces noise, unpleasant odours and dust.

A second step would be finding an area with impervious materials (such as clay) to prevent waste from contaminating soil and groundwater (and surface). ‪This layer of waterproof material that becomes a natural geological barrier must have, according to the laws of Spain, a thickness equal to or greater than one meter. ‪But the preservation of soil and water can not be based  solely on this natural waterproofing. ‪The waste must rest on a drainage layer, such as gravel, in order to carry out the gathering of leachates generated by the trash. ‪This residual liquid, together with the rain water that has entered the landfill basin and that has been contaminated by the presence of the leachate, once collected, must be treated. ‪We must also prevent entry into the landfill basin of rain water fallen outside the basin and that circulates as surface runoff.

Under the conditions defined above, waste could be placed. ‪Now, if we focus on municipal waste, it is known that most of the waste generated at home is sent to controlled landfills (non-hazardous waste); but much of this garbage is recoverable, although, unfortunately, selection has not been done in its origin. ‪For this reason, a step prior to final disposal of waste on the site should be selection at the plant. ‪However, the amount of waste arriving at these plants is so high that surely a thorough review of recoverable material may collapse the plant. ‪Next, a second step which needs to be performed on the waste, prior to final disposal, is compaction. ‪With this, space is gained (tank life) because it removes much of the water that waste  contains (which has to be collected and processed), this will have a positive impact in a decrease of leachate generated in the landfill basin.

In uncontrolled landfills, waste that was piling up could occasionally ignite. ‪At controlled landfills, accumulation has to be orderly and, periodically, layers of material have to be put on top of the  waste. ‪With this, odour is reduced, there is less presence of birds, insects and rodents (which avoids possible sources of infection), it minimizes the dispersion of the waste by wind and removes the risk of forest fires and air pollution due to the fumes of burning garbage. ‪In addition, the site must be fenced (to avoid the presence of animals) and access must be restricted to authorized personnel. ‪However, these buried wastes , due to fermentation, generate biogas, which can be accumulated. ‪To avoid possible explosions these gases must be channelled to the surface of the basin by means of a network of stacks. ‪Legislation states that this gas has to be harnessed to create energy or has to be burned. ‪The solution depends largely on the size of the plant and the amount of waste treated, which will make the use of gas viable or not . ‪In some cases the only goal of the stacks is to allow free exit of these gases to the atmosphere. 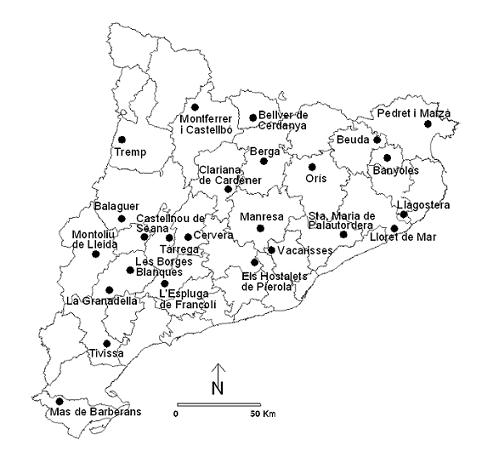 Figure 16 shows the different operating controlled landfills in Catalonia in 2009 while Figure 17 shows an aerial view of central management and treatment of municipal waste in the Catalan county Conca de Barberà. ‪You can see the landfill, the basins for collecting rainwater and leachate, the composting plant, the control building and the warehouse that serves as the centre’s storage and garage for vehicles and machinery.

Once the landfill reaches the end of its useful life it has to be closed. ‪Along with the design, construction, operation and maintenance, closure of a waste landfill is a key aspect that must be taken into account from the start, since an environmental restoration of the area occupied by the landfill must de preformed. ‪The topmost layer of waste has to be covered with material as settling and then seal the landfill with an impervious layer of natural material and another with the same waterproof layer used on the bottom of the basin. ‪The material on the exterior (surface) depends upon the use for which that area was intended .

Minimization and, in some cases, elimination of the impacts on the environment by the disposal of waste in uncontrolled landfills is evident. ‪Now, finding a location for a controlled landfill with all the aforementioned characteristics is not easy. ‪We can be less restrictive and trust corrective measures and artificial materials that current technology offers, but the risk does not disappear completely. ‪Also, any landfill, including a controlled one, occupies space. ‪If the current rate of waste generation is unsustainable and the portion that is actually being recovered is very small, then it is evident that the disposal of waste in landfills is an entirely unsustainable type of waste management.

Figure 17. ‪Management and treatment centre of municipal waste in the Catalan county of Conca de Barbera 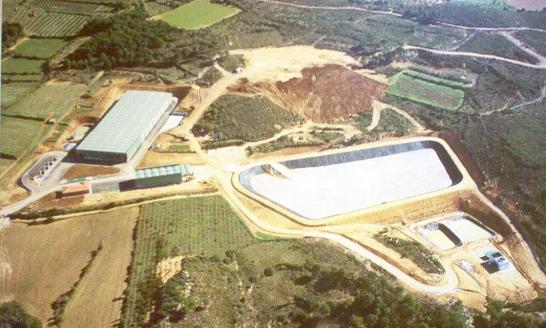