2.3. The reasons: the demographic transition theory

The demographic transition theory has been developed by the American demographer Warren Thompson, from his observations on the experimented changes of several countries birth and death rates over the last 200 years.

The theory has become the explanatory theoretical framework for the world population growth, as the dynamics that it represents have actually taken place in a greater or lesser extent and with a higher or lower speed, in many countries around the world. Thus, the theory explains the transition from a preindustrial society with high birth and death rates to an industrial or post-industrial society with low rates. As it can be deduced, the natural growth rhythm is calculated from the relationship between the birth and the death rates. Accordingly, the transition theory has an universal value, since it doesn’t take into account the effect that some migrations may have on the certain regions’ population growth. 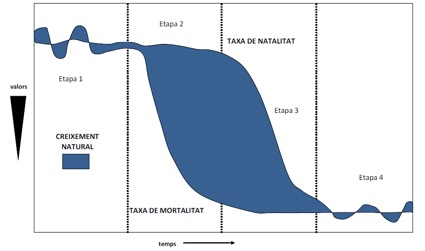 This transition process can be basically divided into the following four stages:

This is an initial stage that precedes the transition itself. It is firstly characterised by very high death rates (40-50‰), which are not only due to specific adverse situations (as wars, hunger, epidemics) but mainly to more structural problems (as malnutrition, lack of hygiene and medical assistance, etc.).

Therefore, the birth rate is very high, too (40-50‰), as a consequence of the high infant mortality, which triggers high fecundity rates, that is, number of children per woman, in order to guarantee the survival of an satisfactory quantity of descendants.

As both birth and death rates are high, the total population growth, without taking into account the migration rates, is very low or zero growth.

As it can deduced, it is a up to mid-18th century typical stage. Currently, data show that no country has these features, since the highest death rates do not anywhere exceed the 25‰.

Stage 2: Beginning of the transition

The driving force of the demographic transition is the general death rate fall, which is due to three main factors: a) the agriculture techniques improvements (harvest increase); b) the technology improvements; and c) medicine and literacy progress. In addition, there is a substantial infant mortality reduction. Consequently, life expectancy moderately grows.

On the other hand, birth rate keeps being high, thus the resulting vegetative growth is excessive.

Most sub-Saharan countries are currently in this stage: their death rates are still high, although there has been a drastic decrease of 20‰, whereas the birth rate keeps around 40‰.

Stage 3: End of the transition

The transition itself ends within this stage, which is mainly characterised by the noticeable fecundity and birth rates reduction.

There are three main reasons that caused this decrease: a) firstly, the descendants’ survival is much higher, since the death rate has decreased; b) secondly, the spread of contraceptive methods; and c) the incorporation of women into the education and into the labour market, which delays the calendar of fecundity, and tends to reduce it.

On the other hand, the death rate tends to maintain a constant low level. So, as the birth rate falls, the population growth rate also decreases considerably.

Some of the Latin American and Southeast Asian countries and all the Maghreb ones are in this situation: decreasing birth rates (around 20‰) and very low death rates (6-8‰).

As a result of the above processes, several countries reach a new stage, which is typical for the post-industrial societies, called ‘modern demographic regime’.

This stage is characterised by very low birth and death rates (however, the death rate can even grow not because of the increase of its intensity, but as a result of the aging). The final result of both facts is a zero natural growth or even a negative one —thus, as at the beginning of the transition— that can be recompensed by the migration movements, or not.

As it can be deduced, a great number of European countries are in this situation: their population tends to decrease because of the natural growth, so as the scant population rises are due to the positive effect of the external migrations.

As it has been mentioned at the beginning, all countries in the world have gone through this transformation process, with more or less intensity and with higher or lower speed. Thus, as it is commonly accepted, the current growth rhythm of each country depends on its demographic transition stage. This means that the detected differences rely not on their dissimilar performances, but on their dissimilar calendars.

The below chart (created with the Gapminder application) clearly shows the transition speed and intensity of each country around the world. The chart represents the number of children per woman (known as synthetic index of fertility) and the life expectancy, as an indirect index of the mortality conditions. It can be easily observed that Western countries are the first ones that reduce the birth rate and increase the life expectancy and that since around 1950, the world is clearly divided into two subgroups: those countries that have already finished their transition and those who still are in the initial stages. From this moment on, the convergence between birth and death rate of the countries is more obvious; therefore, currently, just the Sub-Saharan countries are still to complete their transition. Then, in this region the highest fecundity and birth rates can be found, while the death rates tend to decrease. In this manner, these countries have the highest population growth rates of the world. 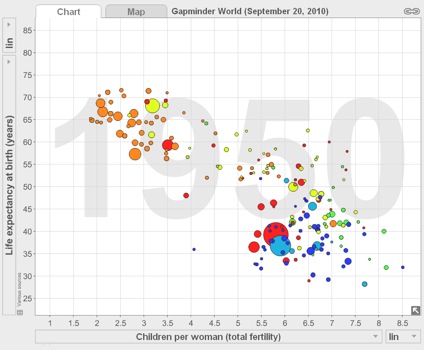